Our sweet boy is now over four months.  He continues to be so happy, mellow and an overall easy baby.  I honestly could not have asked for a sweeter baby!

Not too much has changed in the last month.  He’s now taking around four ounces of breast milk when bottle feeding and nursing every three or so hours if I’m home.  We are giving him 0.5 ml of DHA twice a day in bottles and just started probiotics once a day in a bottle as well.  We did the same with the girls and I think it helped with their tummies.  We just started him on the Level 2 Dr. Brown nipple last night.  We still have all of the girls’ Playtex Drop-In bottles and liners, so hopefully Davis will be able to switch to those at some point and we won’t have so many bottle parts to wash.  Davis is wearing size 2 diapers.

Davis continues to sleep in the Woombie but we now have both of his arms out and are hoping to move him into his crib from his Rock n’ Play this month.  He is getting a little big for the Rock n’ Play and is starting to move side to side.  He continues to nap in his swing (that he now likes).  He is sleeping anywhere from six to eight hours straight at night and will take two to three hour naps during the day if we are home and not on the go.

He currently loves baths, when we sing to him (especially Mommy and  his sisters), bouncing up and down, being tickled, talking with us and having his face gently stroked.  He dislikes being hungry and being put down after being held for awhile.  He prefers to face you when he’s being held.  He also prefers tummy time on his Boppy and not flat on his playmat.

Davis just had his four month check and is doing very well.  The doctor agreed that his head is flat in the back, but didn’t think it warranted helmet therapy.  He had two vaccines and took them like a champ. 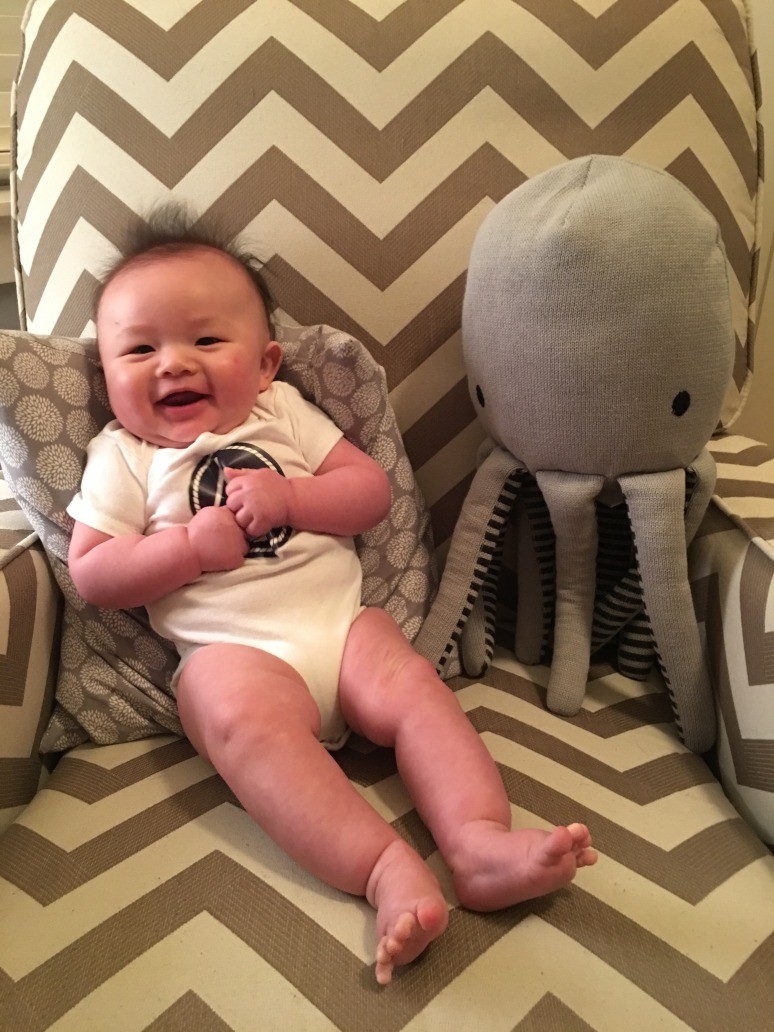 Rockin the headphones at church

We had more snow here this past Monday and lots of wind last night.  We are ready for spring!  Happy March!