This little guy is growing up too fast-crawling, sitting up, eating…..he’s hitting so many milestones!

A little after seven months, Davis was up on hands and knees and rocking back and forth, he only army crawled for a day or two and since then has been crawling like a champ.  He manages to get around very quickly and especially likes crawling on the hard floor where he can make a little more progress.  He often stops and then sits up.  He is sitting up very well and rarely tips over.  We took down on our baby gate at the bottom of our stairs, but it’s going back up very soon.  The girls have been good about putting their small toys away, it’s easy to forget how infants like to put EVERYTHING in their mouths.

Eating was a bit of a struggle at first, Davis gagged constantly and spit up often if things got too far back in his mouth.  However, he is now enjoying foods.

-nectarines-likes it but can be a little fibrous

-yogurt-only tried it once, he thought it was okay

-baby cereal-he likes it best mixed with breast milk, but I’m mixing it more with water now since I prefer to give him my breast milk for his bottle feeds

We feed him in a high chair at home usually first with solids and followed up with a 6 ounce bottle.  It’s been nice when going out to eat that we can put him in a high chair also, he loves to sit at the table and be with the rest of the family.  He gets around a 7-8 ounce bottle right before bed, I use to nurse him after his bottle, but a lot of times he is already asleep after the bottle. 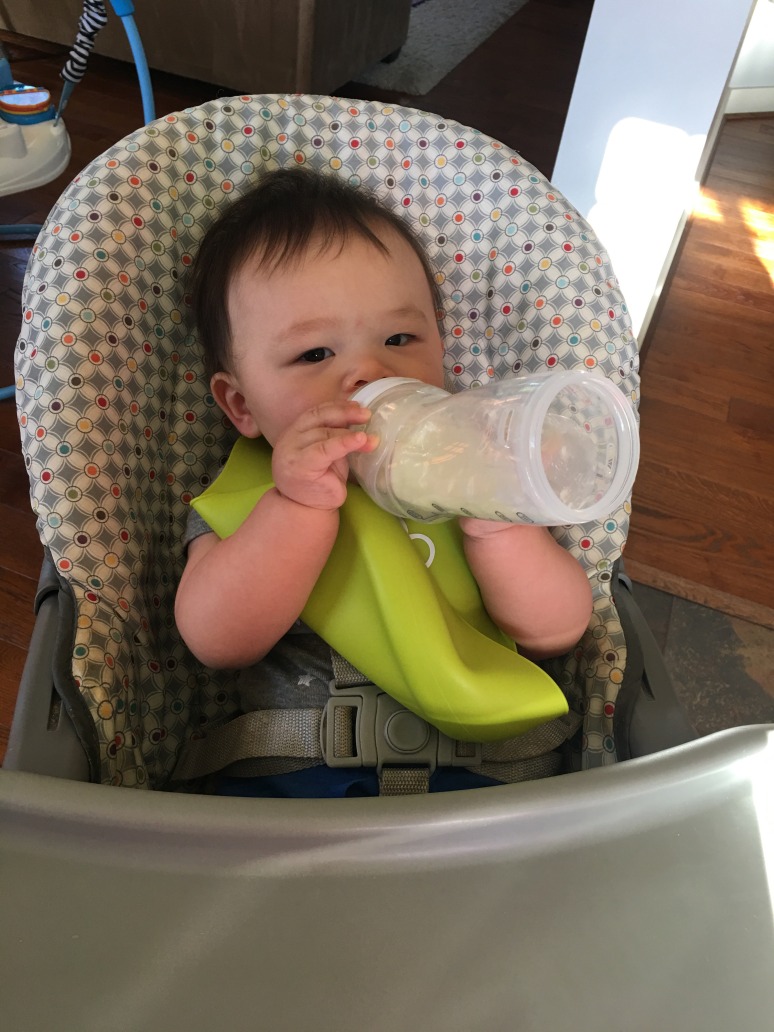 Bottle after eating in his high chair at home. 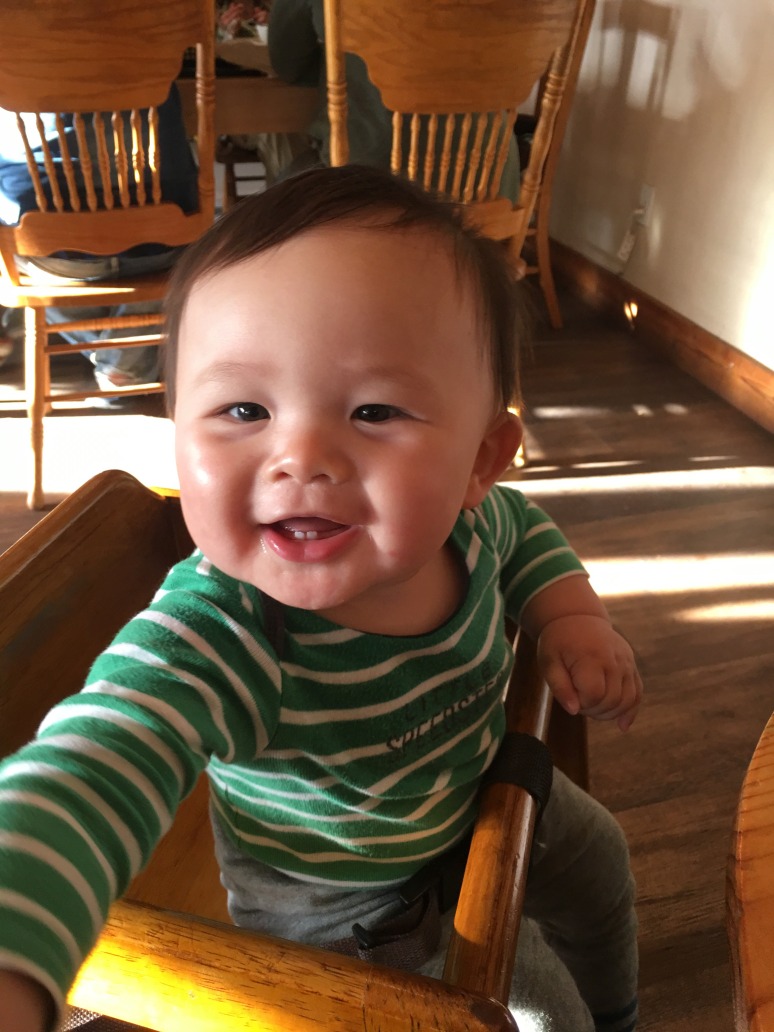 Davis is in mostly nine month clothing and size 4 diapers.  He sleeps through the night, usually from nine PM to six AM, he woke up around 12:30 AM twice and woke up at 5:30 AM when we were just on vacation, but that was out of the ordinary.  We have him in a larger sleep sack now and just like the girls-he sleeps with a fan and a white noise machine.

Davis still only has two teeth, his two lower incisors, well behind the number of teeth the girls had at 8 months.  I can’t complain, as he likes to bite on occasion when nursing and I can’t even imagine how much it would hurt if he had more teeth.

I’m mostly pumping at this point, Davis rarely nurses these days.  I was thinking of actively pumping until Davis is nine months, but then I go back to pumping until I know that he’ll have breast milk until one year.  I have a good amount of frozen milk, but now that he drinks more per feeding (usually 6-8 ounces) I’m having to dip into my frozen supply.  I’m currently pumping about four times a day and it’s a commitment.  I do think the thought of “Fed is Best” helps.

Davis loves to be held, he is happy as a clam if he’s being carried around.  He LOVES to be in the Baby Bjorn and squeals with delight when you first put him in.  He continues to be happy and calm, we just could not ask for a better baby. 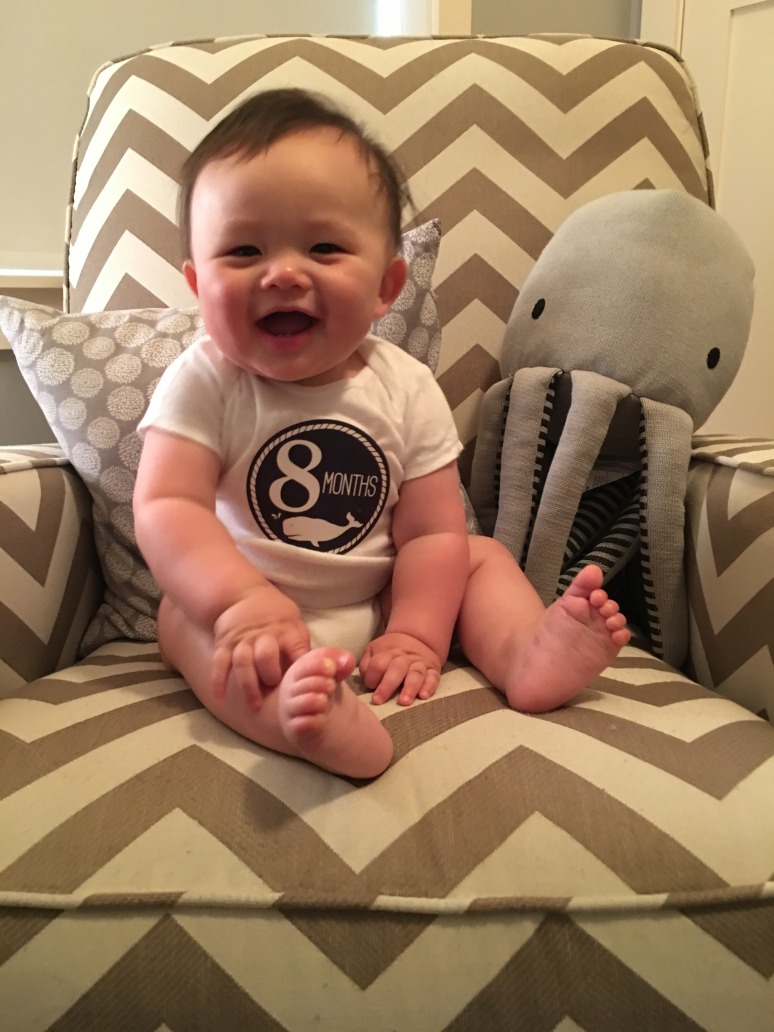 Beach time-loving taking in the views 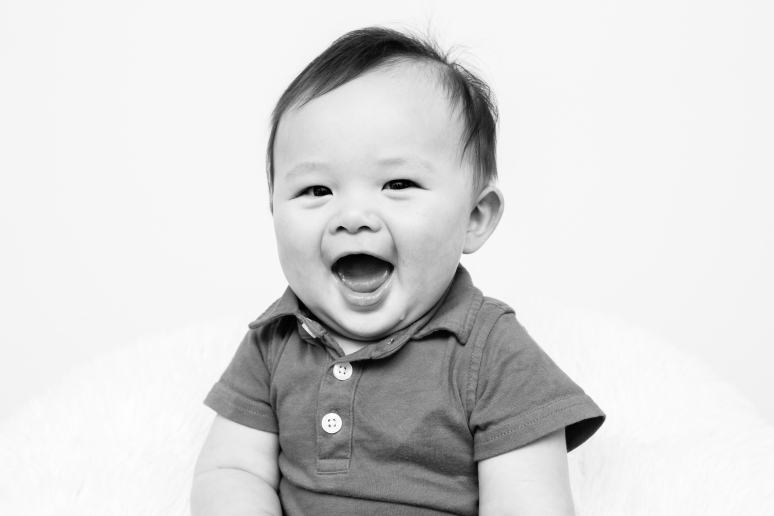 Hamming it up at his 7 month photo session

The twins turn three next week!  Time is going so fast, we are loving every minute of it (well, almost every minute of it, minus the tantrums).  We are back to potty training Zoe, it’s round two for her.  I’ll post on how it’s going soon.

Hope all of you had a great Fourth of July!  We had a great Oregon Coast getaway and are back in Seattle enjoying the sun with a few more days off this week!

A beautiful life of growth, family, loss, victories, and a whole lot of Jesus!